runs only on bank 2 and even on this bank it idles rough, it is impossible to rev it up because once you reach approx. 1500 rpms it dies.

After ignition on, EML light goes off within 2 seconds.

When I unplug MAFs, the engine won’t start at all.

Diagnostic codes are none at all on both DMEs and EML.

I am using ISTA+ with ICOM, which basically behaves like the old DIS and DK1 yellow head, which I don’t own anymore as several of these just died in my hands and the ICOM with ISTA works the same. Both DMEs are with no fault codes, the same is with EML. Once I unplug MAF or coil, it appears as a fault. The problem is, that the owner also reported that there is a battery drain so there are many things to focus on, and it is difficult to trace them all at one time. Every time I am leaving the car, I rather disconnect the batteries, which also erases fault codes, if there are any. There are none after the rough run anyway.

One thing I noticed, when going to the DIS data, I see the ignition timing should be somewhere 8-13 degrees and there was one other value, I do not remember very well, but they were marked as HG and SH or something like that. There was no further description on these notes. Anyway, once the engine is running for a little while, the ignition timing shown in real time values is 5-6ish degrees, not 8+ like mentioned in the DIS data.

What did I tried to do next?

The fuel pressure on both banks was 3,1 bar, fuel pressure regulators are plugged to correct intake manifold on the vacuum side (crossed). Tried to start the engine with regulators unplugged to see if fuel is not pouring out of them (if the diaphragm inside is not broken).

Tested the donut rings on resistance as advised, middle pin to one side – open circuit, the other side 2 Ohm resistance on both sides.

I did not yet manage to test for spark properly as we normally do much newer cars and have equipment for these, but not for those old fashioned systems. I only can tell from what I see as the exhaust is removed, there is some spark on bank 1 seeing what comes from the exhaust. Waiting for the timing light and spark tester as these are hard to get these days in our country. Time to time I was seeking for these and never found them anywhere in stock, now I will have to find them even abroad as I really need them.

The spark plugs removed just for first view (as I replaced the ZFR5F for BKR6EK on cyl 6 and 12 because of their different resistance) are fouled. Pictures are attached. 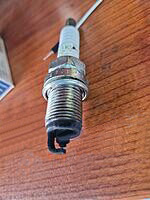 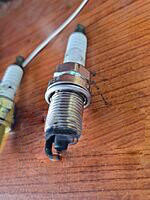 I already managed to get a proper fuel pump for 750i from Bosch (PN 0580314069), as I found the information, it should fit the 850i pump. I am now communicating with the customer if he would like to do a full refurbishment of the pump as I suppose the strainer and maybe hoses will not be OK according to the fuel pulled from the new fuel filters.

The injectors were given a good clean in ultrasound, I tested them yesterday and even the ones which were not giving fuel spray at all are now working nicely.

As I have approximately 60 cars in the yard, the work progress on this one is slower than I would wish. Putting everything back together with testing on one pump running both banks will take place today or tomorrow – the car is scheduled for the workshop on today’s afternoon and tomorrow the whole day. I will see if this will make the other bank to run. As I have absolutely no idea about how long it ran on very lean mixture, I am a bit worried about the valves. I will probably take an inspection camera and take a look inside of the cylinders through the spark plug holes before reassembling. My plan is also to replace all the spark plugs with BKR6EK afterwards. 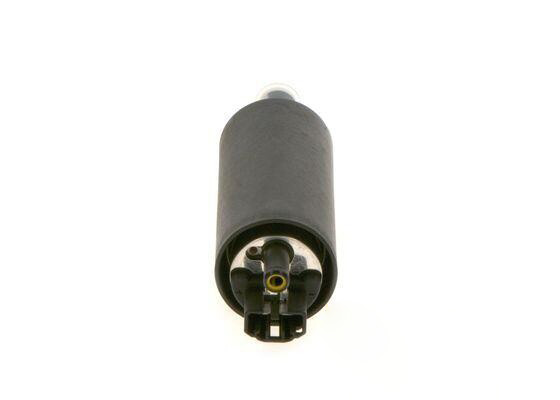 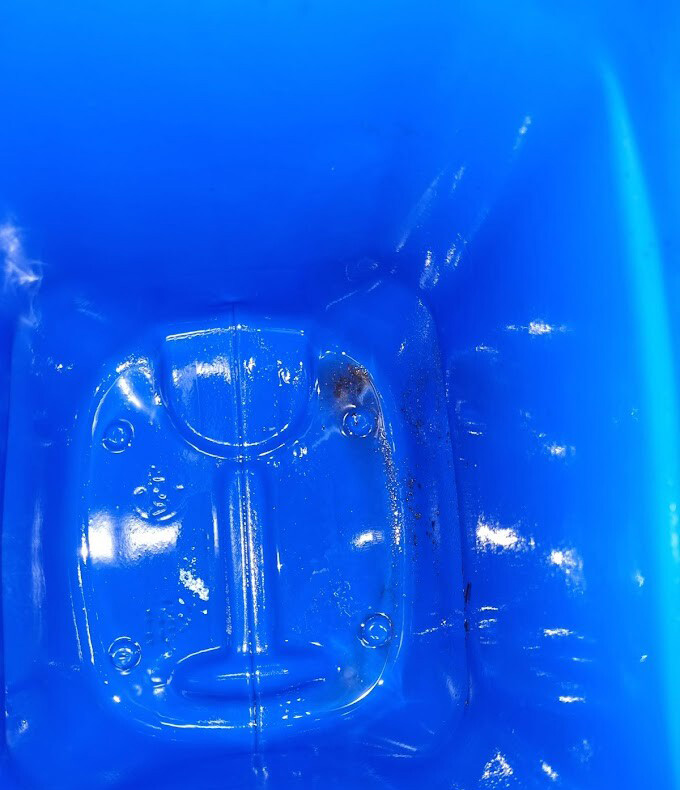 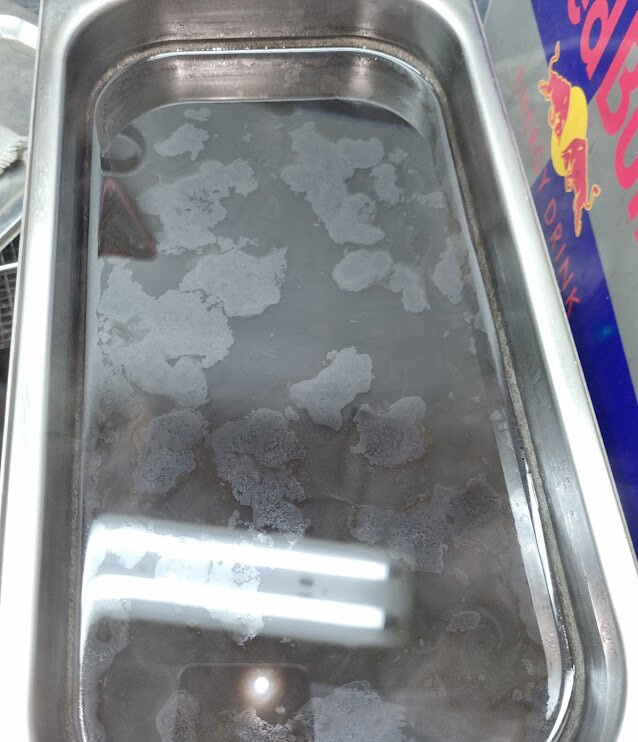 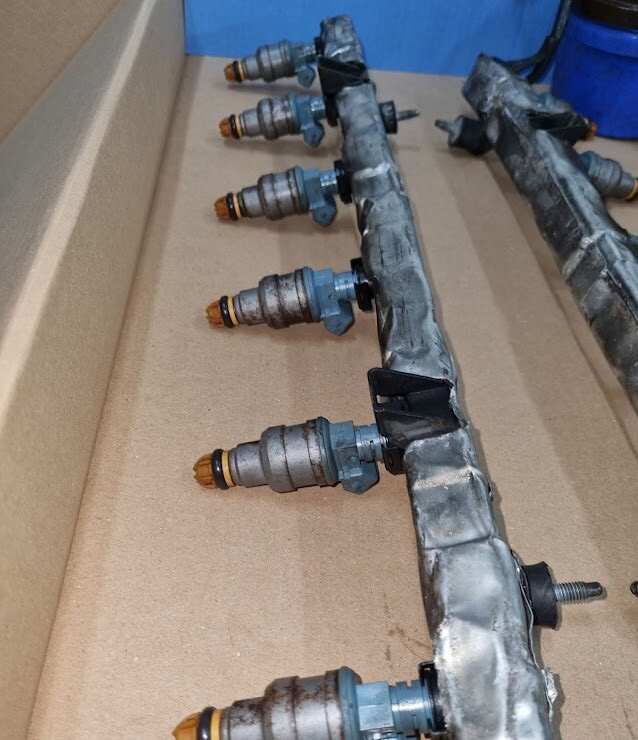 Now bank1 is running nicely, bank 2 is a non-runner. Once I unplug the distributor from coil on bank1 to see the actual behavior of bank 2, here we go. The engine starts and sounds normal on just bank 2 for 2 seconds, then dies.

– Wiring is fine – checked with bulb test
– We do have a spark – checked on several cylinders, plugs are BKR6EK, resistance approx. 1.5kOhm. Anyway, seems like for the first seconds the spark is stronger than later.
– We tried again to swap the ECUs, coil, distributors, rotors, spark plug wires along with CID sensors. During this I just by eye checked the rotors timing, looks approximately 30 degrees away from each other, which should be fine.
– on coil number 2, there are 2 wires on terminal 1 (ground). In the wiring diagram I only found one wire running to pin 25 on DME2. The other wire looks like original fitment, has approx. 2 mm thickness and is green. Do you happen to know if it is normal or it is a sort of tuning by some previous owner?
– there is battery power on coil 2, terminal 15 with ignition in position II. Tested also with bulb test.

So, all in all, in my head I ran through the previous process and I cannot find any mistakes made. We swapped everything regarding ignition (coil, distributor, rotor, all spark wires incl. CID sensors) from the working side (bank 1) to the now non-working side (bank 2) and nothing changed. Spark plugs are BKR6EK on all cylinders now.

We do have spark on bank2, but seems like it is stronger on the very start and weaker a second later. For testing, I ordered a new BOSCH ignition coil, as the 40kV coil I would love to test with is not available anywhere near.

CPS and CID sensors are plugged in correctly
When operating, the ECU (both) sees the revolutions from the CPS
The wires were measured for continuity CID2 – DME2 (pin 1 to 16, 2 to 44, 3 to GND) and verified they do not have any additional resistance with a bulb test.

I am still seeking for the information, if a green wire from terminal 1 on coil 2, running to somewhere under the front left headlight is normal or not. I do not have another car to compare and in the ETM from 1991, 1992, 1993 there is nothing about this wire – seems like it should not be there but looks to be a part of the original wiring. Confusing to me.

I was hoping to put some better news but seems like I am running in circle.

On Friday, the passenger side (bank 1) was running all the say without any issues. The car even went out of the workshop on its own power.

Today, after some thinking about what to do, I started the engine. Driver’s side was working, passenger’s side worked for 2 seconds and then shut down. Perfect symptom of CID sensor or spark failing. There were no changes made, the only thing that actually changed is the outside temperature. It is way colder than it was on Friday.

I decided not to do anything else but put in well charged batteries. Now the engine starts as a whole and shuts down. That car is jokin on me, honestly.

I would wish to measure the AC signal from the CID to DME on both sides now, but only have regular probes and I am a bit worried about damaging the oscilloscope. Do you have any ideas? I usually work only on DC systems so this is a bit new to me.

I again measured the resistance of the ignition cables running to cycles 6 and 12 and this time I also was bending the cables and found out that once bent, they are bad.

so the ignition cables 6 and 12 were the problem.

Glad the problem is sorted!